Murphy was awarded 3rd place at the Yorkshire Golden Retriever Club’s Gundog Novice Working Test for Any Variety Retriever at Timble Ings Near Harrogate on Saturday 24th April 2010. There was an entry of 23 dogs.
Murphy has completed his first three retriever tests with The Gundog Club, the first with merit and the second and third with distinction.

On 13th June 2010 Murphy was awarded 2nd place after a run off at The Pennine Training Area Novice Working Test at The Strines, Sheffield.

He has started 2011 in form, finishing 2nd in a novice Working test at Nettleton Woods, Caistor on 6th March organised by the lincs area of the United Retriever Club.
The Lancashire and Merseyside Field Trial Society held a Novice Working Test at Myerscough Hall near Southport on 8th May 2011. Murphy came 2nd.

Murphy’s next Novice test was again with The Lancashire and Merseyside Field Trial Society held at Meols Hall near Southport. He finished a creditable 3rd.
2012 has been an outstanding year so far for Murphy, he has been in the awards in all five of his tests at present beginning with a Certificate of Merit with the Yorkshire Golden Retriever Society at Timble Ings on 21st April. He followed that up with a 2nd with the United Retriever Club ( North Midlands Area ) on 20th May at Haughton Warren Farm, Walesby, Notts.
His next award was with the Pennine Training Area of The Northern Golden Retriever Association on 10th June at The Strines, Sheffield where he received a Certificate of Merit. He was also chosen for the inter club test against Dove Valley Gundog Club on 26th August.
Murphy was again in the awards gaining 3rd place with the Dukeries (Notts) Gundog Club Water Test at Allerton Park Estate near Knaresborough on 24th June.
The URC North Midlands held a Novice Test at Wentworth, South Yorkshire on 1st July. There were 39 dogs competing, Murphy again received an award of a Certificate of Merit.
The Lincolnshire Gundog Society held a novice cold game test at Orford near Binbrook on 12th August . Murphy once again finished second out of 24 competitors. Surely it is only a matter of time before he gets that elusive first place!.
On 26th August Murphy came first in the Novice inter club test against Dove Valley. He was competing for the Pennine Training Area and they won the team test overall.

The United Retriever Club Lincolnshire Area held a Novice Working Test on Sunday 3rd March 2013 at Thorganby Hall Grimsby A total of 39 dogs competed. There were 5 tests in the morning. Test 1 was a double marked retrieve over a stream and uphill into woodland. Test 2 was a marked retrieve and a blind retrieve in the same area. The dogs had to go over a fast flowing stream up a bank and into the field beyond. Test 3 was a double marked retrieve, the first dummy being thrown onto the water and the second dummy thrown onto a bank beyond the water. That retrieve having to be picked first. Test 4 was a long marked retrieve uphill in a field and then a blind retrieve on the opposite side. Murphy’s scores were test 1 16, test 2 14 test 3 18 test 4 19. Having made the cut (65) 12 dogs were taken through to complete two more tests after lunch. Test 5 was a picking up exercise over a fast flowing stream up a field to the wood beyond. Six dummies had been put out previously and the dogs had to retrieve a dummy and then go back for a second. Murphy’s score was 19. Test 6 was a two dog walk up, the first dog having to jump over a fence and retrieve a marked dummy from grassland beyond. The second dog had to go down hill over a stream and into the wood beyond. The dogs then swapped over. Murphy’s score was 17. Murphy finished with a creditable 103 points four points behind the winner. We received a Certificate of Merit. 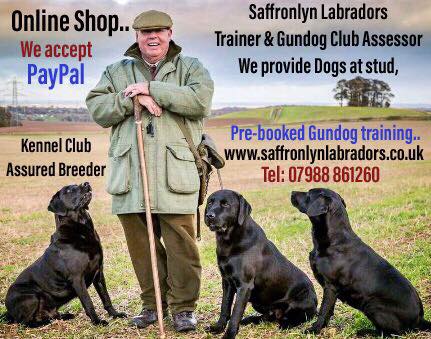 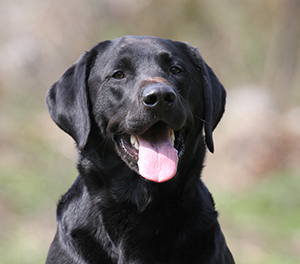 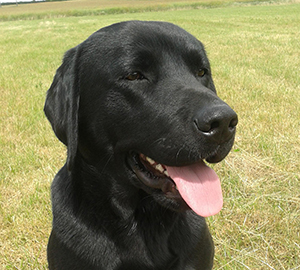 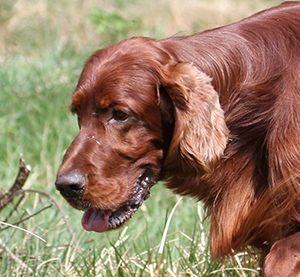